The Land Trust Alliance is pleased to welcome community leaders to Rally to share their insights with us: 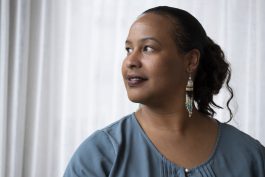 Colette worked with local communities, national funders and elected officials in the post-Katrina and post-Deepwater Horizon disaster recovery. She was a lead coordinator for Gulf South Rising 2015, a regional initiative around climate justice and just transition in the South. In 2015 Colette was selected as an Echoing Green Climate Fellow, in 2016 she was named a White House Champion of Change for Climate Equity, and in 2018 Kenyon College awarded her an Honorary Doctorate. In 2019, Colette was named an Obama Fellow for her work with Black and Native communities on the frontline of climate change and she gave a TED Talk, “Climate change will displace millions. Here’s how we prepare.” In 2021, Colette was appointed a Margaret Burroughs Community Fellow. In addition to developing advocacy initiatives that intersect with race, systems of power and ecology, Colette directs GCCLP’s legal services in immigration and disaster law.

Under Colette’s leadership, the Gulf Coast Center for Law & Policy serves on the governance council of the Southern Movement Assembly, co-chairs the national Water Equity and Climate Resilient Caucus with PolicyLink, serves on the steering committee of the Ocean Justice Forum and anchors the 5-state, multi-issue initiative Gulf South for a Green New Deal. Colette was the lead architect of the 13-state Southern Communities for Green New Deal with the Southeast Climate & Energy Network and the Red, Black & Green New Deal, the national climate initiative for the Movement for Black Lives.

The Land Trust Alliance is a non-partisan organization and does not endorse the political views of Rally sponsors, plenary speakers or presenters.