Stephanie Flynn is the Federal Grants Manager at The Trust for Public Land. She joined TPL in 2017 to support its community-based work to create parks and protect land for people. Prior to this, Stephanie worked for a campaign consulting firm where she was the Operations Manager. She received her BA from American University in International Studies and Spanish Studies, with a focus in International Communications. Stephanie is originally from Connecticut, and is based in Washington, DC. 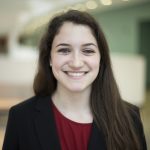